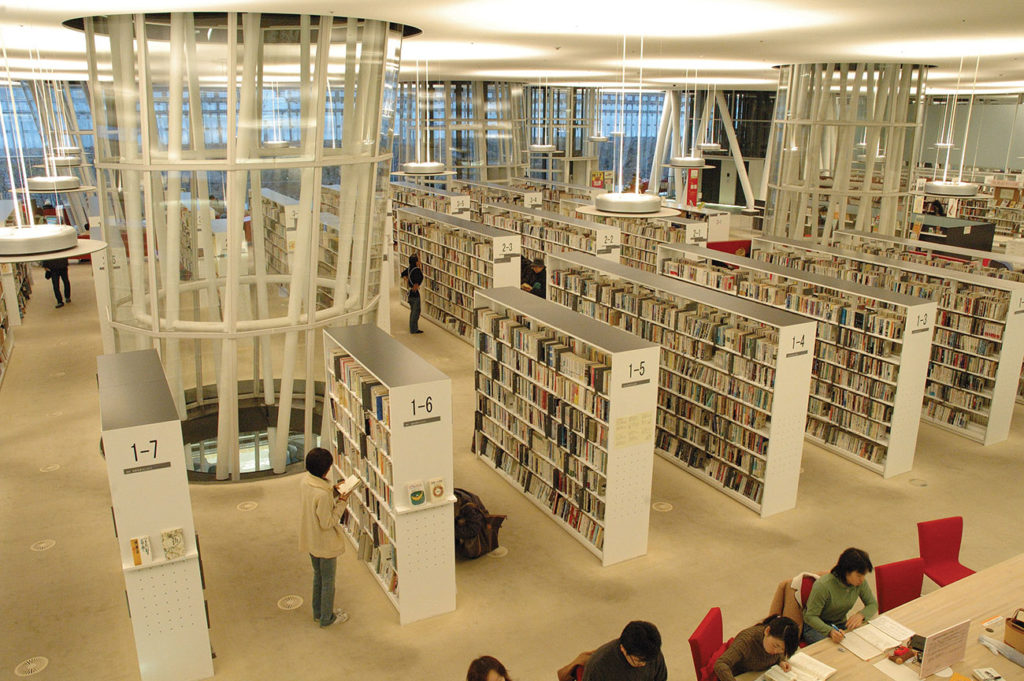 The Sendai Mediatheque stands along Jozenji street, a main avenue famous for its stately rows of Zelkova trees. Completed in August 2000, five and a half years after the open competition held by Sendai City, this project rises eight storeys from ground level with 21,600 square metres in total floor space.

Thirteen tree-like Tube elements penetrate vertically through the building plates. Built from lattices of steel pipes and ranging from 2 to 9 metres in diameter, the Tubes are not only flexible as structural elements, but are also spaces where information and different types of energy (light, air, water, sound, etc.) flow while facilitating vertical circulation.

Through the action of these tubes, fields are generated by the natural and electronic flows within the uniform space of the Plates. The Skin refers to the envelope that separates the interior of the architecture from the exterior. The concept for the double-skin façade facing the main street is particularly important.

The Mediatheque is composed of these three elements and few fixed walls, allowing each floor to be expressed as one large 50-square-metre room. The rooms are divided into many undetermined spaces by the tubes and visitors may freely pass time anywhere and in any way they like. Since opening in January of 2001, the Sendai Mediatheque attracts up to 2,000 people daily with its lively urban plaza-like atmosphere and serves as a symbol of public space for the citizens of Sendai.

Toyo Ito | FuturArc
For someone as highly acclaimed and awarded as Toyo Ito—who is the recipient of The Royal Gold Medal from The Royal Institute of British Architects; The 22nd Praemium Imperiale in Honor of Prince Takamatsu; The Pritzker Architecture Prize; The UIA Gold Medal, to name a few—one would think he might b…